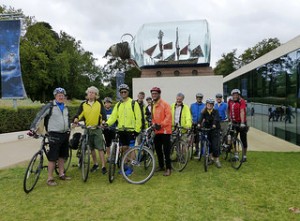 Today, at Ye Ancient Market Place in Kingston-upon-Thames, the fortnightly enactment of the venerable and venerated ‘Bread Pudding Ride’. The cast of 22 was larger than expected, perhaps a tribute to a dry sunny day, more the twilight of Summer, than the dawn of Autumn. An artistic journey commenced: via the suburbs of Tolworth, the joys of Ashtead Common, the motor cars of Leatherhead and the by-ways of Fetcham. A fine performance saw arrival at Great Bookham and its splendid common to end Act 1.

The interval was in 3 parts; the Windsor Castle, the Royal Oak and, for non-imbibers, the Domestique Cycle Cafe – an establishment notable for outstanding secure cycle parking.

Here the ensemble playing suffered somewhat by reason of the Mystery of the Disappearing Key. It is hoped those involved, and their bicycles, escaped and are now safely home. The depleted cast made haste to Kingston by way of Surbiton, and the Seething Trycyclingathon, taking their final curtain after 33 miles.

14. Wednesday 18 June. A superb sunny evening saw 7 Cyclists leave via Kingston Bridge, Bushy Park, Hampton, Fulwell, Twickenham, St Margarets, Richmond Bridge to Richmond Hill for refreshments and the company of many others from all parts of South and West London. Total 12 Miles, 1 puncture

2. Sunday 26 January. A wet and blustery day saw four hardy Cyclists set off via Lower Ham Road, Aerospace Estate, Ham, Ham Gate of Richmond Park, Roehampton Gate, Barnes Green with one extra joining us at The Sun pub, a very quiet Hammersmith Bridge (closed to traffic for repairs), Chiswick (with an extra bit added to make sure we didn’t get to lunch too early…honest) to Strand on the Green for lunch at the ‘Bell & Crown’. Afterwards via Brentford, Syon Park, Isleworth, Twickenham to Fulwell for Tea & BP at Squires Garden Centre, then Bushy Park and Kingston Bridge. Total 24 soggy Miles. Map: www.trimbleoutdoors.com/ViewTrip/2553223

This site uses Akismet to reduce spam. Learn how your comment data is processed.