This is the second in a three part series on the Mini-Holland programme in Kingston. The Mini-Holland (or Go Cycle) projects are designed to provide safer and more accessible cycling (and walking) paths along a number of roads across the Borough of Kingston. This post looks at the proposals to make Kingston and Cambridge Roads, which link Kingston to New Malden, safer. The previous post looked at the Mini Holland schemes constructed in 2019. The final post in this series will look at what could come next after the Mini-Holland programme comes to an end.

One of the key features of the Mini Holland programme is to make key roads across the Borough of Kingston safer and more convenient for cycling (with measures added to benefit walking at the same too).

A number of Mini Holland schemes are already complete including Portsmouth Road and Kingston High Street where the number of people cycling has significantly increased since improvements were completed. Construction is currently taking place between Kingston and Kingston Vale (along Kingston Hill) and has also recently commenced between Kingston and Tolworth (along Ewell Road). A direct Cycleway from Kingston to New Malden has also been proposed and is the subject of this post. This route would be along Kingston and Cambridge Roads linking to the new 2-way cycle track recently constructed on London Road.

What is proposed for the Kingston to New Malden route?

The proposed cycling and walking improvements will connect at one end to the Kingston Vale Cycleway (along London Road) joining the route to Wheatfield Way for direct connections to Kingston Station; Kingston town centre; and Surbiton. At its other end, the proposed improvements will reach New Malden and the edge of Cycleway 31 for a direct, mainly off-road, path to Raynes Park.

Along Kingston and Cambridge roads it is proposed that there will be:

Space for the new cycle track, and better crossings for pedestrians, will come primarily from the carriageway space currently used by motor traffic. In many parts of the road, it is already wide enough for a segregated cycle lane to be built and therefore bolt-down kerbs cycle segregation kerbs may be used like the ones recently introduced on Kingston Hill. In other places there will be some changes to kerb locations; parking; loading; and bus lanes to make room for the upgrades. We understand that Kingston Council has been working closely with Transport for London to minimise any disruption on bus journeys as well as speaking to local businesses to maintain loading and parking access. 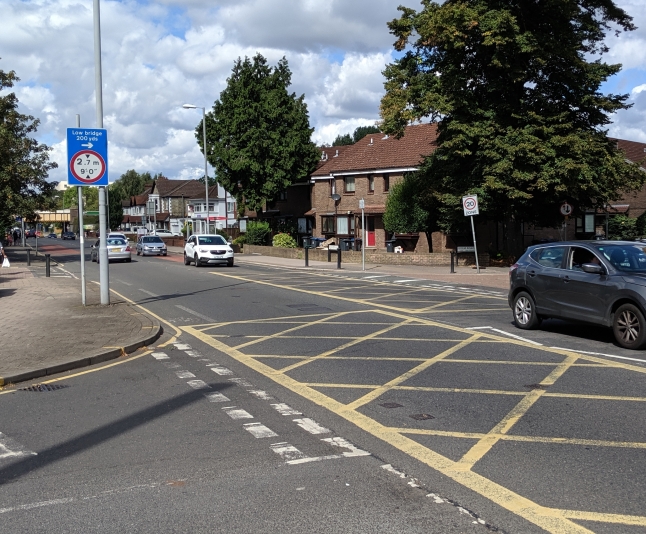 Current Kingston Road, New Malden. Advisory cycle lane markings have been heavily worn by passing motor traffic with no form of segregation for cyclists and no clear priority over side roads for pedestrians

Why are these improvements needed?

Unfortunately both Kingston and Cambridge Roads have been the location of many collisions causing injury to people cycling and walking. There have been over 120 people walking or cycling reported to have been injured (as well as one death) between 2005 and 2017 along the route following a collision with one or more motor vehicles. 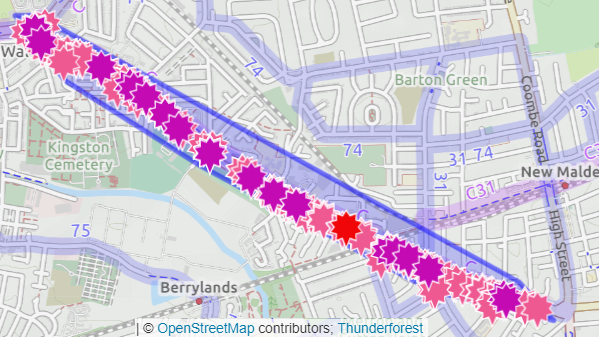 A map showing locations of reported collisions injuring (or killing) a person walking or cycling along the proposed Kingston to New Malden route from 2005-2017 Source: cyclestreets.net

This map does not include any collisions not reported and therefore the number of injuries along the route is unfortunately likely to be even higher. The Mayor of London is rightly targeting ‘Vision Zero’ (the aim for there to be no deaths or serious injuries on London’s road network by 2041). To achieve this aim, something needs to be done to make these roads safer for vulnerable road users.

Why should we be encouraging more cycling and walking?

Kingston already faces motor traffic congestion particularly at peak times. As the Borough grows, this could get even worse. However, cycling and walking are very efficient modes of transport with people cycling and walking taking up much less room than a person taking a car to their destination. By getting more people to walk and cycle, this can reduce congestion on the Borough’s roads.

What are our thoughts on the proposals?

We are really excited by the proposals for Kingston and Cambridge Road. Whilst not perfect (for example, we would like loading on certain parts of the route to be restricted), the proposals will be a huge upgrade on the current sub-standard and dangerous cycling and walking facilities on the route. These improvements will make people feel safer, it will calm the environment and will encourage more people to walk and cycle in the area.

Subject to the outline plans being approved, we will continue to work with Kingston Council as they progress to the detailed design stage. We have already successfully campaigned for some changes to the plans which will benefit people cycling (and walking) and we will continue to campaign to get the best possible cycle infrastructure for the route.

The proposals to make Kingston and Cambridge Roads safer are due to go to Council Committee for approval on 11 February. We will continue to strongly support the proposals to make this road safer for all road users and hope local Councillors will too.

The Kingston to New Malden Cycleway is the final Mini Holland scheme proposed. After this has been completed, the Mini Holland programme will come to an end.

11 February 2020 update – Kingston Council approved the construction of the Kingston to New Malden Cycleway. Construction could start in Summer 2020 subject to final TfL approval and completion of detailed design.

What about the rest of the Borough?

There are many parts of Kingston Borough that will not be next to a Mini Holland route and people will therefore continue to be put off cycling (and walking) if the local road network is not made safe for them to use. The final part of our series on Mini Holland will therefore look at what could come next after the Mini Holland schemes have been completed.

In the meantime, if you are local to Kingston and Cambridge roads and would like them to be made safer, why not contact your local councillor to let them know?